skip to main | skip to sidebar

Just a mini comic I cranked out the other night, thought I'd share it... I really gotta get back to posting stuff up here haha
For the uninitiated, clicking the images will make them larger, so you don't have to struggle to read them at this medium size 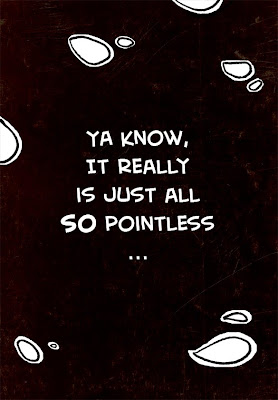 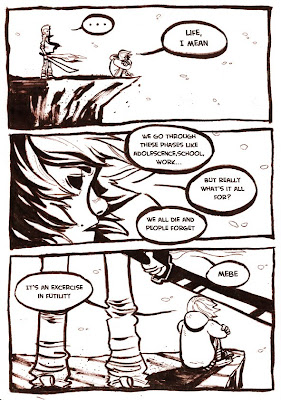 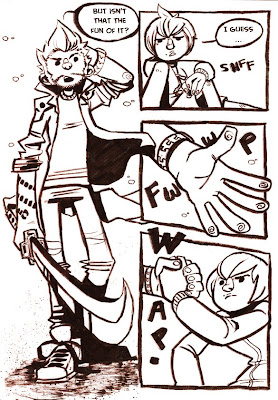 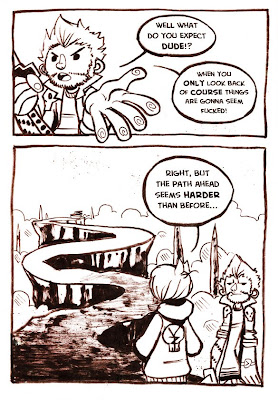 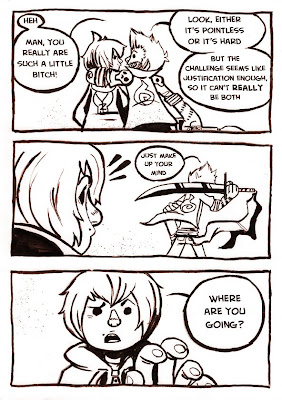 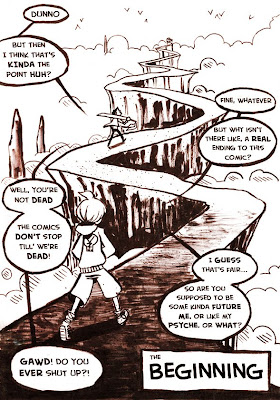 My buddy Corey's webcomic Seedless is getting trade paper back'd early August, and he asked a couple of his artist friends to hook him up with some chapter covers. Anyways heres mine w/ and w/o the title that Corey added. 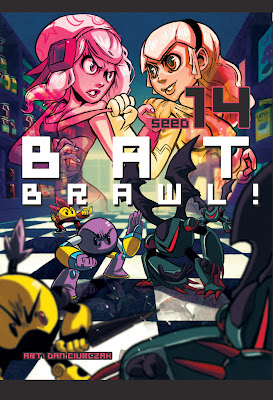 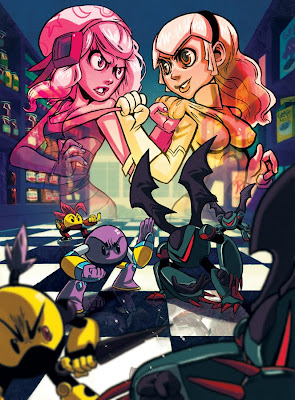 CBR did an interview with Corey about the comic that you may want to check out. In any case this was pretty fun to do. Also if you wanna watch this being made, I streamed pretty much the entire process outside of composing it. Since my livestream auto-records everything I do, all the videos of it can be found HERE. Also keep that link in mind so you can come visit me when I stream
Posted by Dan at 12:53 PM 2 comments:

FUUUUUCK it's been a while

Well shit - sorry guys. It's been like forever since I've posted and yet sadly I still can't even really post all that much of what I'm actually doing. At least right after comic con I'll be able to post my 16 page SS comic, as well as a couple of art pieces I did for the art book. This years books are gonna be CRAZY at SDCC. Where as last year we were peddling 1 40 page book - we somehow managed to crank out not one, but TWO 80 page books for this year. Factor in that we now have a 10x10 foot table as opposed to the piddly 8x2 from last year, and we have a recipe for one hell of a july 21st-26th. Pretty stoked.
Anyways there have been a lot of new developments over at JohnnyOutlaw.com that you should really check out. Lots of new gameplay footage and lots of new posts about the innerworkings and process that goes behind making the game. In any case I'll cross post the image I pooped out for the concept art post - our first miniboss - The Duncan. Other than Johnny Outlaw I've been doing a lot of work in comics lately. Started up a comic project with Mark Andrew Smith lately, and have been secretly trudging along on that. I'm also STILL working on Sharknife Double Z with Corey, and I'm happy to say we're like, 10 pages away from finished :D so stoked. In any case I've been practicing inking for a bit and figured I'd post some of that up as well. 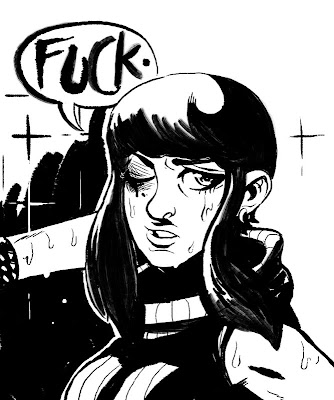 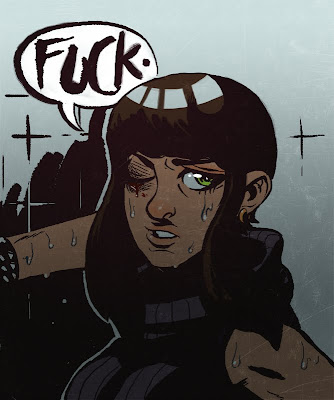 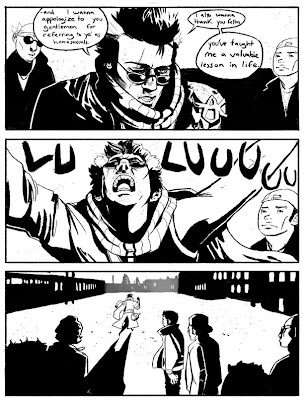 seriously if anyone understands this Final Fantasy X + Wild at Heart crossover I'll be shocked. Please hit me up if you are the one person who this makes sense too haha. 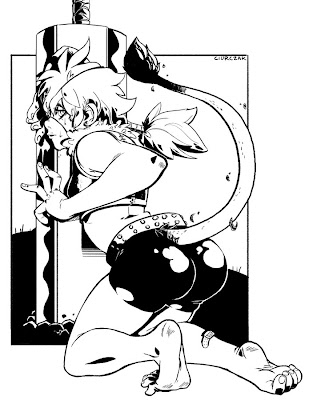 anyways I'll try and post up some stuff from my comic with mark soon, to whet all your appetites, cuz its gonna rock. Other than that I may start saving my warmups, so I'll start compiling and posting those, so while stuff may be NDA, i'll at least have SOMETHING to post in the mean time.
Posted by Dan at 12:39 PM 2 comments:

so I haven't been all that active posting on here.  It's not that I'm not working, but more that most everything I'm doing lately is under some sort of pseudo NDA, so I just can't post it yet - but soon, soon.
anyways something I've just been neglecting to update with is stuff for a game I'm working on with a friend.  Originally we had planned to do king cool together, but upon realizing we couldnt get a programmer to work on it, we decided to go a more easily programmed route.  So philip is learning to program and I'm doing the art.  If you haven't already checked it out you really should mosey on over to johnnyoutlaw.blogspot.com.  While you're there you could check out all the fan art we've been getting, and submit your own (you really should!!). Anyways heres some shit from over there. as for why I'm busy other than this I'm currently juggling school, two satellite soda books, my zuda comic, and toning sharknife double z with corey.  Sadly I can't really show any of this currently haha, but at least schools almost over which will give me more time to work on all this stuff.  Also as soon as april ends I should be free of a lot of obligations, after which I have a few new cool projects that are gonna start up, that I can share more of with you all.
In any case stay tuned and my apologies for the sporadic updates - the posts will pick up again shortly. stay tuned!
Posted by Dan at 11:12 PM 1 comment:

So my final project for painting last quarter I basically forced my way into a sweet creature design, which later stemmed its way into a SS book 3 piece, though I'm completely redoing it, so I can go ahead and post it.  Anyways heres the design, the quick digital piece I made to work off of, and a horrible photo of the 4 foot tall oil painting:

and something I somehow overlooked posting earlier throughout the dump, PRINCE!: 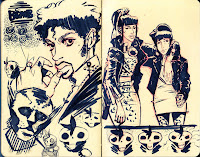 SCULPTING!!  So I took a sculpting class last quarter, and heres 2 of the projects I did, first is of a character I'll explain more of soon enough (hopefully anyways), and the second a giant lego funky love bot 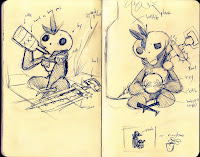 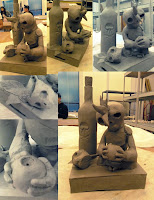 oh and I guess a painting of ippei gyuobu made 3d 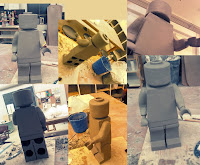 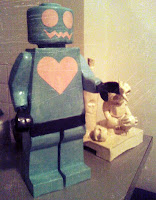 Ears and Hair and Tits and Ghosts

So I did the same thing here with hair and ears that I did earlier with hands and feet, basically copying other artists hair and ears with an emphasis on figuring out the construction of them: 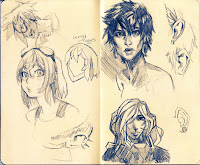 Mariachi guy I did in a livestream jam with Dani - he made another mariachi and we were gonna color the other persons, but it kinda fell through at the end: 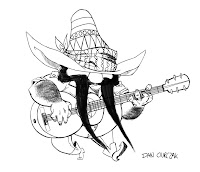 This was something I had planned to do for halloween but quickly abandoned for a number of reasons, some of the designs are salvageable though.  It was basically just a line up of a bunch of random ghosts I could use for Geist:

and of course another SG speedpaint:

this dump is taking FOREVER, I didn't realize just how many pictures I had left unposted.
Posted by Dan at 5:33 PM 2 comments: